Complimentary Copy with Sign-UpSol Is Not Lost 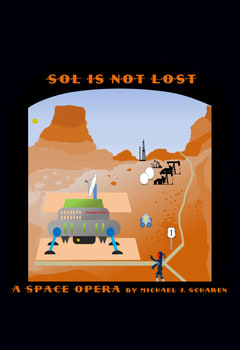 Please give a review on Goodreads.com!

Trevor Van Leeuwan returns to Earth on a routine cargo run. But is anything ever just routine? A stowaway shows up on the ship past all security measures. There are pirates in deep space attacking innocent cargo haulers and miners. Though he is more at home in the breakaway colony planets of Magellan and Bering, he has interests here. The Van Leeuwans have just struck oil on Mars and the boom is on. So who are the real pirates? Could they be the same one's who have been holding up human beings for millennia?

The great-grandfather of Trevor van Leeuwan, Marcus Aurelius Van Leeuwan, twin brother Hans-Hermann Hoppe, H-cubed, family and friends sought out these two co-orbiting Earth-like planets nearly a century earlier, but those struggling for freedom on the Mars Frontier cannot be abandoned to the nihilists. The good guys created the breakaway civilization -- since those with all the money and power were not capable, nor can they ever know about it.

“Mr. Michael Scharen's novel, Sol is Not Lost looks back to the 1950s to 1960s era of science fiction. The novel's plot, characterization, and subject matter strongly remind me of Robert Heinlein's Libertarian leaning works. The Moon is a Harsh Mistress, If This Goes On, and The Roads Must Roll come to mind.“ – Michael Bertrand, goodreads.com review

"The scenes on Mars are realistic and the descriptions of the settlements and transportation vehicles are both well-thought out and imaginative. The author uses his physics background to embellish the story in a way that will please the kind of readers who have loved Arthur C. Clarke or Kim Stanley Robinson." – Casey Dorman, goodreads.com review

Early Review -- 4 stars -- 2021-05-18'Sol is not Lost’ harks back to an earlier style of sci-fi writing. It is gritty, and has an almost old fashioned feel. If, like me, you spent a lot of time reading anything you could lay your hands on from the lost box of sci-fi under the 2nd hand bookstall, you are going to love this. The pace feels measured, slowly accelerating into an absolute page turner of a story which kept me on the edge of my seat until the end. As a non-scientist reader it felt exceptionally well researched and the technical descriptions neither grated nor got in the way of the plot, In fact the explanations added to the solid feel of the world and enhanced understanding of how it fitted together and operated. In keeping with the style of the work the emotions of the characters are not deeply explored, there is sufficient depth to make them real and vital, but this is not a novel about the fate of one emotionally tortured hero against the odds, but rather a deeper look into how a group can interrelate and work together against a threat. I couldn’t put this down, and will be reading the sequel, and re-reading this."S. MacAndrewgoodreads.com